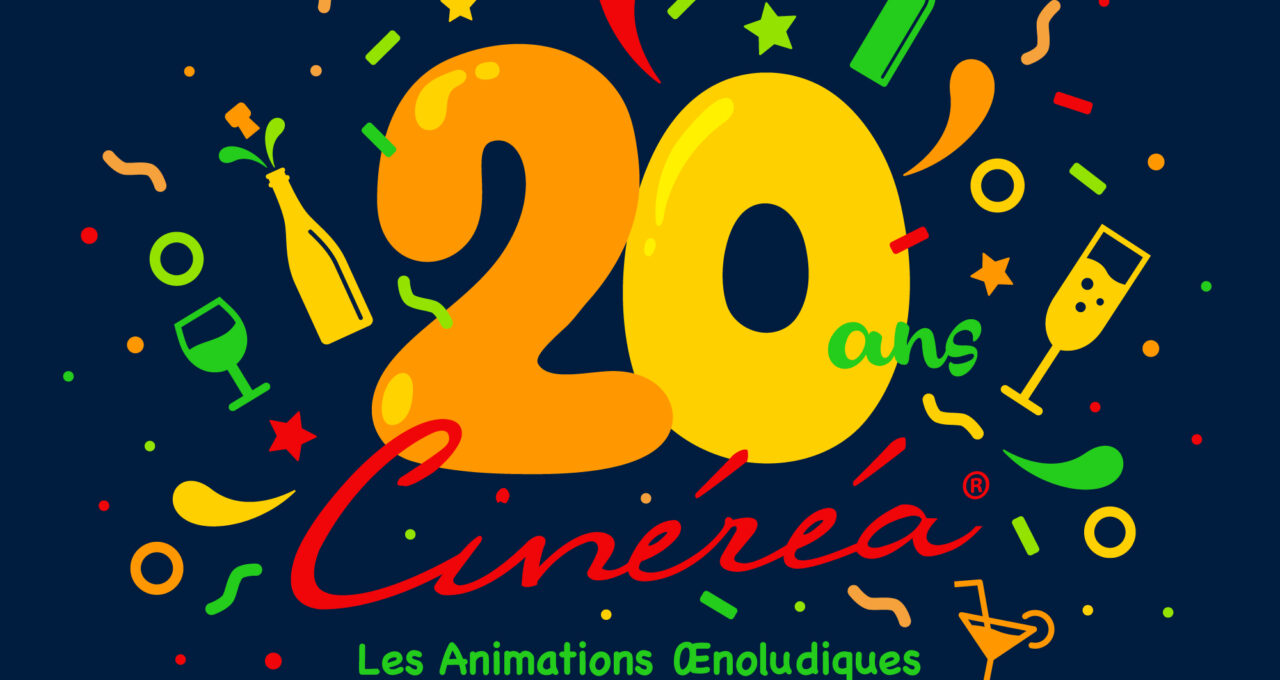 Cinérea is 20 years old, a look back at its beginnings

Founded in ANGERS (Maine et Loire – 49) by Arnaud Houlès, Cinéréa immediately positioned itself on a small niche in the business seminar animation market, namely events around wine and gastronomy in the form of games and adapted to all, today called the Oenoludic Animations .

These animations around the wine had as objective, the discovery of the wine and the gastronomy in the broad sense but without pretension, to give to the participants amateurs or not emotions, feelings, humor. These animations rested on two strong pillars: the concept of show by animation in order to keep a group of participants in suspense and in a dynamic as well as by the staging of the animation in itself. And then there was the cultural notion of entertaining them in a ‘smart, high-end’ way., namely, among other things, telling small crisp stories or anecdotes from the great history of wine and/or gastronomy or how to become a pleasure taster. The idea was to get away from classic tastings which were certainly very interesting but which were not in the DNA of its creator.

Arnaud Houlès says: “  I assumed that all the participants in a business seminar liked at least wine and that they weren’t with me to take an oenology course but simply to have a good time. It was necessary to create a spirit of celebration and conviviality between these people who often exchange nothing but professional relations. Thus, wine was also a means of entertaining them, which is why another other VINI VEGAS® was born , Le Casino du Vin . »

In 2000, the Casino du Vin was set up and immediately met with great success with hotels and event agencies. At first modest, gaming tables have modernized to be what they are today. Adaptable game tables, precise scenarios, customization, in short, this set was a winning cocktail. « There was a lot of work on the logistics, says Arnaud Houlès, because our first Wine Casino, I remember, was an after-meal event for 200 people in Poitiers and it took 4 hours to set up and so much disassembly. On the return to Angers in the early morning, my team and I around good bottles, had the same conclusion: The animation is brilliant but we will have to work on the logistics! « .  And this was the creation of a VINI VEGAS® brand, Le Casino du vin and modular tables for all game themes (wines, beers, chocolates, etc.), covers for transport, lighting, personalized glasses with the Festi’verres, etc. In short, a more professional organization to respond to several events at the same time and with a large number of people .

“Also, in this development, I remember that we had to arm ourselves with patience to find a banker who invests on Casino tables but wine! continues Arnaud Houlès . We were not many to believe it! You had to be a real crazy gambler and passionate about wine like me! But others also believed in it: dynamic bankers, passionate animators, benevolent friends, a dedicated sales team, my beloved little wife who joined the team in 2006 and loyal customers.

Cinérea, the adventure of a network

And then, the adventure multiplied as a network of franchised distributors was set up in France, Europe and the Americas. Boys and girls who also believed that the adventure could continue in their sector and who have still been there for the most part for more than 15 years. It is true that the Vini Vegas ® Wine Casino was a marvelous driving force. And it could only be created in France, the country of wine.

During these 20 years, at the counter of Cinerea records , in 2008, a Vini Vegas® of 3000 people with 50 gaming tables and to complicate the matter, it was in Rhodes in Greece. “It was for all the animators present, a magnificent moment and an animation that went like clockwork! nostalgically remembers Arnaud Houlès.

“Today, we can unpretentiously announce that we are the leading wine events network in France and Europe thanks to Cinéréa International with nearly 1,000 events per year. 20 years of experience, more than 20 original animations on different themes. Let the adventure continue!!! And thank you to all those who accompanied me during these 20 years! Thank you to my loyal teams and our customers. concludes Arnaud Houlès by opening a bottle of 1999 vintage champagne.